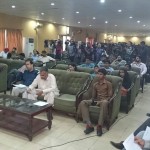 The purpose of this press conference was to express serious concerns on two main issues regarding the government’s proposed cybercrime law – Prevention of Electronic Crimes Bill:

Concerns were raised regarding specific clauses of the proposed bill, its impact on civil liberties and industry, as well as potential impact on media. The following demands were made:

This bill and an analysis can be viewed here

See also our resource doc on the proposed cybercrime bill

Citizen groups, Journalists’ Body reject PEMRA’s proposed draconian regulation on Web TV and other allied attempts to undermine digital rights and freedom of expression
PUBLIC STATEMENT BY CITIZENS AND STAKEHOLDERS On government attempts to curtail freedom of expression, right to information and digital rights; and appropriation of internet and cyberspace. Islamabad – January 28,...
321 Likes

Internet Surveillance
REPORTS of the government installing the Web Monitoring System (WMS) first came to prominence when questions relating to its set-up were raised in the Senate regarding the type of company...
310 Likes