Facebook Transparency Report: Since When Is Criticism of the State Illegal in Pakistan?

Facebook just published its second transparency report, revealing requests it receives from governments around the world for user data and content removal. The report introduces Facebook’s policy of dealing with government requests as “We respond to valid requests relating to criminal cases. Each and every request we receive is checked for legal sufficiency and we reject or require greater specificity on requests that are overly broad or vague”.

Between July and December 2013, the Government of Pakistan made a total of 126 requests for user data relating to 163 users or accounts, and Facebook fulfilled 47% of these requests. Moreover, access to content on 162  pages and profiles was restricted.Facebook describes Pakistan’s content restrictions as “content primarily reported by the Pakistan Telecommunication Authority and the Ministry of Information Technology and Telecommunications under local laws prohibiting blasphemy and criticism of the state.” Since Facebook states that they check every report for “legal sufficiency”, it is alarming that “criticism of the state” is being listed as prohibited content in Pakistan. 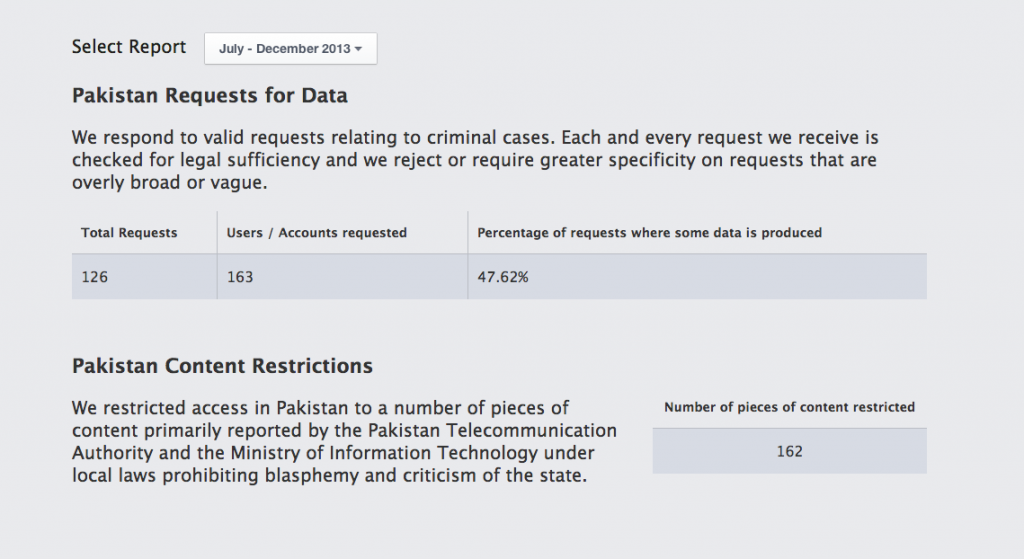 In the past, Facebook pages of groups talking about secularism have reportedly been taken down by Facebook, including the widely read Urdu page “RoshniPK”. Given the history of content removal on Facebook, the recent report raises the following questions:

Pakistan does not have laws that protect privacy of an individual on the internet. Even though the Constitution states privacy as an inviolable right, this is routinely overlooked under the pretext of “national security”.  There is currently no judicial oversight for wiretaps, surveillance and monitoring of content. Moreover, a significant number of Facebook pages inciting violence and hate speech targeted towards non-muslims, certain sects of Islam, atheists, and the military remain accessible. Therefore, it is even more important to ask that precisely what type of content are the authorities targeting? More importantly, the lack of transparency and accountability of the Ministry of Information Technology and Telecommunications must be scrutinized.