On May 18, 2014, Bolo Bhi sent a letter to the Federal Ombudsman stating we found MOITT’s non- provision of information citing Section 8 part e, f and i in response to our FOI requests non-satisfactory. In a letter dated June 3, 2014, the Federal Ombudsman’s office called a hearing between representatives of MOITT and Bolo Bhi on June 11, 2014.

May 28, 2014: Members of Bolo Bhi and officials of PTA attended a hearing called by the Federal Ombudsman’s office regarding Bolo Bhi’s FOI requests

Bolo Bhi representatives attended a hearing with officials of the Pakistan Telecommunications Authority (PTA) at the Federal Ombudsman Secretariat in Islamabad on May 28, 2014.

The hearing was in connection with Freedom of Information requests filed by Bolo Bhi representatives with the PTA, seeking information on the asking two questions. One, whether surveillance is carried out by PTA on the Internet. The second request was for a list of websites blocked by the PTA.

The requests were filed in February 19 of this year under the Freedom of Information Ordinance 2002, after which the authority had 21 days to respond to the request. However, despite an acknowledgment, the deadline was not met following which, as per the procedure defined under the FOI Ordinance, we filed a complaint with the Federal Ombudsman about non-provision of information by the PTA.

The Ombudsman issued letters to the PTA asking it to respond and called a hearing. Prior to the hearing, Bolo Bhi received a written response from the PTA through the Ombudsman.

On the subject of blocked websites and process of blocking, the PTA maintained the decision is made by the Inter Ministerial Committee for the Evaluation of Websites (IMCEW). The PTA shared the official notification that formed the committee in 2006, as well as the composition of the IMCEW. This they acquired from the MOIT, by forwarding our request to them.

The PTA also informed that under Section 8 of the PTA Act, 1996, PTA as a regulatory authority is obliged to follow policy directives issued by the Ministry of Information Technology & Telecom. Bolo Bhi was also provided with the 2012 notification issued by the Ministry of IT & Telecom that calls for censorship of “obnoxious (blasphemous & pornographic) content over Internet in Pakistan.”

The PTA, however, did not share a list of blocked websites citing sensitivity of the list and as mentioned in their written response, referred the matter to the IMCEW to respond as per Section 8 of the FOI Ordinance.

In response to the question on surveillance, the PTA stated that under Section 54 of the PTA Reorganization Act 1996, it can carry out surveillance by intercepting calls and communication if instructed to do so by the federal government. However, the officials stated that PTA has not been carrying out surveillance in Pakistan and has received no directive to date, by the government, to do so either.

The hearing with PTA was concluded satisfactorily. Questions were addressed at length with relevant legal provisions read out during the course of the meeting. When asked why there was a delay in providing the information, the official maintained this was the first request of its kind made to the authority, and vetting a response internally to a request of this nature caused the delay.

It must be mentioned that PTA is the only authority that acknowledged and responded to our FOI requests.

Bolo Bhi is now waiting for a date of hearing with the Federal Ombudsman regarding three FOI requests filed with MOIT. The Ministry cited Section 8 part e, f and i, in response to our requests. These clauses deal with non-disclosure of information under the pretext of national security, classified information, and exclusion from disclosure in public interest. Bolo Bhi has responded expressing dissatisfaction with the response. A letter in this regard has already been dispatched to the Ombudsman.

May 18, 2014: Bolo Bhi Files Complaint with Ombudsman Re: Non- Satisfactory Reply by MOITT

Read our letter to the Ombudsman here

May 5, 2014: MOITT Cites Non-Disclosure Clause & Does Not Provide Information

In response to the letter issued by the Federal Ombudsman, the MOITT cited non- disclosure of information under Section 8(e), (f) and (i) of the FOI Act 2002.

In its response, MOITT stated: “Due to the relation of the requested record to all of the above mentioned sub clauses, the same cannot be shared with the applicant at present.”

The PTA has responded to Bolo Bhi’s request for information regarding the surveillance, list of

blocked websites and Inter-Ministerial Committee for the Evaluation of Websites (read press release).

conducted detected the presence of FinFisher Command and Control servers in Pakistan. FinFisher is a digital spying server used for mass surveillance of the internet.

About the IMCEW, PTA has also informed that the Ministry of Information and

Technology/Federal Government under Section 2(fa) of the Pakistan Telecommunication Act, 1996, is mandated to issue policy directives on matters relating to telecommunications, and the job of the PTA is to implement these. The mandate of blocking is with Inter-Ministerial Committee which was constituted by the Prime Minister of Pakistan in 2006. MoIT Notification No 5-1/2005-DFU dated 29th August 2006, a copy of which has been provided. Further, as per Section 8 of the Telecom Act, MoIT issued a policy directive on May 31, 2012 to PTA for effective monitoring & control of obnoxious content (Blasphemous & Pornographic) over internet in Pakistan. This Policy mandated PTA for blocking blasphemous and pornographic content. Earlier, regarding disclosure of the list of websites blocked by PTA, it authority stated it is still awaiting the decision of the competent authority.

Later, in a detailed response, regarding the request for the list of blocked websites, PTA said it “considers this data to be critical in nature and it has social/religious impact which can result

into a law and order situation since the data can be misused. therefore, the matter has been referred to inter-Ministerial Committee to proceed under Section 8, subsection (i) of Freedom of Information Ordinance 2002.

April 14, 2014: Federal Ombudsman Does Not Admit Complaint & Refers It To PTCL

Following our complaint to the Ombudsman regarding non-compliance by authorities, the Federal Ombudsman issued letters to the following authorities, directing them to respond:

MoITT and PTA, since their receipt of our FOI requests on February 17, 2014, have failed to

meet the 21-day deadline to respond to Freedom of Information as per the 2002 Ordinance. Similarly, PTCL has failed to meet its deadline of March 16.

We received a call from a PTA official confirming Bolo Bhi’s FOI requests had been received. The official added they were being forwarded to the relevant departments.

Text message from TCS confirms Bolo Bhi’s FOI requests have been delivered to the Ministry of IT. We have not received any confirmation from the Ministry itself however. We publicly informed a ministry official of the FOI requests via Twitter. 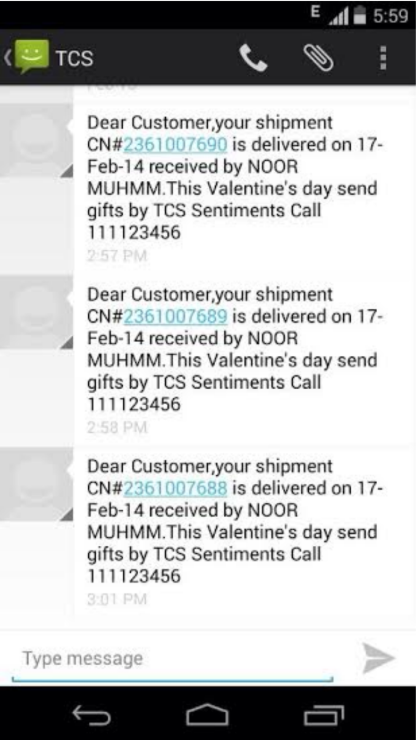 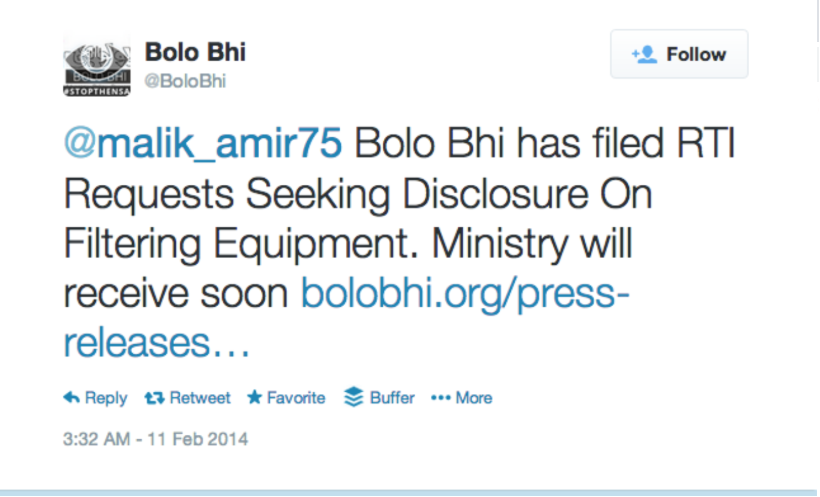 Bolo Bhi has filed Freedom of Information requests to inquire about surveillance and web filtering equipment reportedly acquired by the Government of Pakistan. The request seeks information regarding specific laws under which surveillance & filtering equipment has been acquired. We have asked for information such as purchase orders, cost of equipment, gazette notifications, and takedown procedures (more in our press release here).

[…] February 12, 2014, Bolo Bhi filed three Freedom of Information requests under the FOI 2002 Ordinance with the Ministry of Information Technology, Pakistan […]

The request seeks information regarding specific laws under which surveillance & filtering equipment has been acquired. We have asked for information such as purchase orders, cost of equipment,