Hassan Khalid’s letter to the Minister

We hope you’ve had the chance to glimpse over the past letters we’ve sent you; the citizens are touched that you’ve taken the time out to receive and acknowledge the letters that Bolo Bhi has been delivering. The hope to hear from you soon, we are sure you will reply.

Today’s letter is from a very concerned citizen, Hassan A. Khalid, who is a student of Gomal University trying to earn a BS Degree in Computer Science. He has benefited from YouTube which was a means for him to learn Graphic Designing, Web Development (evidently handy in his chosen field). Before Youtube was banned Khalid use to give tutorials on YouTube after learning and educating himself in different areas of Computer Science. He began a channel on YouTube and catered to nearly 28,000 students/month, which is a really impressive number. These classes are expensive and detailed; he made it accessible, affordable and even understandable to students around the world.

We’ve restricted progress, education and knowledge, all for the sake of proving a point; the question that he asks really causes one to think, what is the point of all of this? We hope you get the chance to read this letter and empathise with the citizens of Pakistan, and the many others around the world affected by this ban.

Till the next letter, 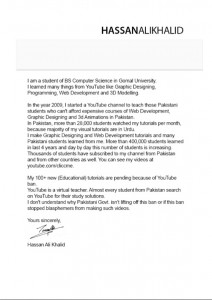