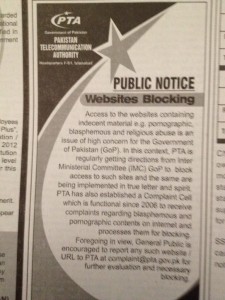 In a newspaper ad published today, the Pakistan Telecommunications Authority issued a public notice mainly advertising their complaint cell & asking users report URLs containing content that falls under the category of “pornography, blasphemy & religious abuse..”. As the ad suggests the complaint cell was established in 2006 & has been functional since. The ad in itself showcases the deeply flawed state of Internet policy in Pakistan.

By suggesting that PTA takes up complaints by users and processes it for blocking, the PTA suggests it is bypassing the “apparent procedure of the inter-ministerial committee..”. For the past many years all criticism of increasing censorship has met with the same explanations cum excuses of a “standard interminstrial procedure”. The official statements remain that ad-hoc blocking of content does not take place & websites are only blocked as & when ordered through an interministerial  board. There are innumerable examples to prove otherwise & the recent ad by the PTA is just one. More interestingly, through this ad the PTA has also coined a new term “religious abuse” which is as vague and prone to abuse as other reasons cited for curbing access online. Moreover, it is not surprising that complaint cell does not speak of over regulation & censorship and has not advertised for users to register complaints about websites that have been censored in Pakistan.

PTA’s recent attempt is reminiscent of a China-like censorship model where internet users are encouraged to report content directly to the regulator. Just last year the government floated a tender to build a china-like firewall in Pakistan and have routinely cited China as a great example of “internet regulation”. Important to point out that the PTA is not alone in chiming the china model, this has been echoed through the Ministry of IT and various policymakers several times. Reflecting a clear disregard and understanding of internet governance and net neutrality.

Here are a few questions for the PTA:

– According to the ad, the complaint cell processes and blocks URL reported, does that negate PTA’s earlier stance that it is just a regulatory body, not responsible for policy issues?

– Who decides what is religious abuse or blasphemy, if a crowd has to make the decision, should that mean laws become irrelevant?

– What about increasing curbs on political speech & dissent? Where does a user report blocking of access to information?

– Lastly, should content deemed indecent for a group of families mean it should be blocked for the entire country?

Instead of investing on increasing access to information, innovation & technology for transparency, the government of Pakistan remains focused on limiting access to information and allows for constitutional rights to be ridiculed and surpassed. The ad is but a mockery of an already flawed system that runs at the whims of those in the corridors of power.

PS: What the PTA should have said 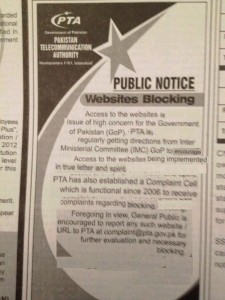 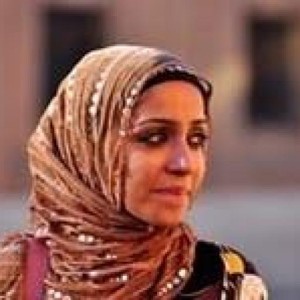 This is pretty disgusting but expected. We are picking the least freedom friendly best practices from around the globe and applying them to Pakistan.
I, for one, am all for a completely open Internet with full access to objectionable content and porn. Each ISP should have a customer level content filter flag. It should be set to ‘filtered’ by default. Everyone who wishes to remove the filter on their account should be asked to call their ISP and make the request.
This is the most mature and people friendly way of implementing content control.
PTA time should be better spent tracking down physical owners of terrorist websites with help of the agencies and putting them behind bars. 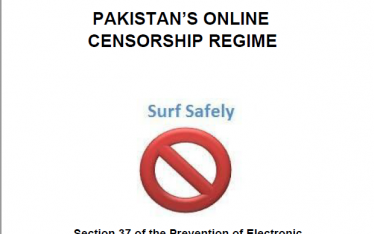 Bolo Bhi’s Policy Brief on Pakistan’s Internet Censorship Regime
Bolo Bhi traces content regulation over the years, starting with the Inter-Ministerial Committee for the Evaluation of Websites (IMCEW) notified in 2006 to Section 37 of the Prevention of Electronic...
9 Likes

Government must tap the potential of e-sports in Pakistan instead of banning them
Pakistan Telecommunication Authority (PTA) on July 1 blocked the online game PUBG on grounds of complaints received by various segments of society citing it to be “addictive, wastage of time...
14 Likes

Problems with PTA’s VPN Registration
by Saihaj Shahbaz Butt On 10th June, Pakistan Telecommunication Authority (PTA) made a press release confirming that they will be continuing their (Virtual Private Network) VPN registration process. If all...
18 Likes