7/05/2014:  The Pakistan Telecommunications Authority (PTA) has responded to Bolo Bhi’s request for information regarding surveillance equipment and list of blocked websites.

Regarding disclosure of the list of websites blocked by the PTA, it is still awaiting decision of the competent authority (who that is, has not been specified).

It is important to note here is that the PTA has gone on the record to say that the surveillance of internet is not carried out by PTA, which is the regulator. Given that the tests that confirmed the presence of FinFisher servers in Pakistan, the question arises that what agency of the government is really carrying out surveillance?
Bolo Bhi had filed right to information requests with the PTA under the Freedom of Information Act 2002 on 12 February, 2014. Under the law, an authority has 21 days to respond to the request. We filed a complaint on 24 March 2014 with the Federal Ombudsman about failure of the PTA to respond to the information requests within the specified period. On 2 April, 2014, the Federal Ombudsman notified us that PTA has been given the deadline of 18 April 2014 to respond to our request. Complying with the order of the Federal Ombudsman, PTA responded on 15 April 2014.

PTCL and Ministry of Information Technology & Telecommunication have also been sent similar requests, but have not responded. We are awaiting for an official notification for a hearing at the Ombudsman’s office.

Scan of the response: 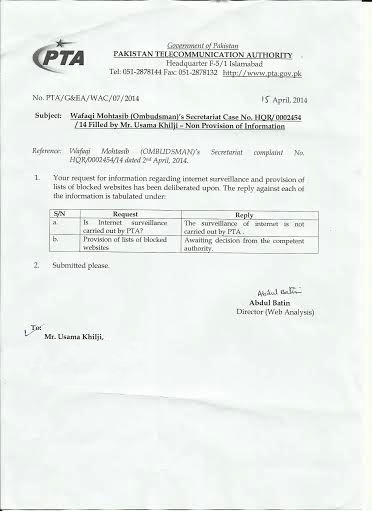 Bolo Bhi means ‘Speak up’, in Urdu. We are a not-for-profit  registered under the Societies Act XXI of 1860. Bolo Bhi is geared towards gender rights, government transparency, internet access, digital security and privacy. We are a team of individuals with diverse backgrounds who are passionate about the same causes and believe it is crucial to bridge the gap between rights advocates, policy makers, media and citizens. It is by bridging this gap that one can move ahead to chart a way forward and resolve issues through consensus.

[…] PTA Says It Does Not Conduct Surveillance […]

Citizen groups, Journalists’ Body reject PEMRA’s proposed draconian regulation on Web TV and other allied attempts to undermine digital rights and freedom of expression
PUBLIC STATEMENT BY CITIZENS AND STAKEHOLDERS On government attempts to curtail freedom of expression, right to information and digital rights; and appropriation of internet and cyberspace. Islamabad – January 28,...
302 Likes

Internet Surveillance
REPORTS of the government installing the Web Monitoring System (WMS) first came to prominence when questions relating to its set-up were raised in the Senate regarding the type of company...
295 Likes