Below is a summary of the discourse that has taken place in court over the last year, on lifting the ban on YouTube, and input that has been gathered from stakeholders outside it.

In this regard, two notable events must be mentioned:

1)     The Senate Functional Committee on Human Rights passed a unanimous resolution on April 29, 2014, to lift the ban on YouTube (Annex A)

2)     The National Assembly unanimously passed a resolution to lift the ban on YouTube on May 6, 2014 (Annex B)

In the following pages, is a summary of discussions including proposed solutions.

Summary of hearings and submissions before court:

–       When Google was approached to remove the offending video, Innocence of Muslims, by Pakistan, the following was Google’s response on why they didn’t block it (as per their letter to Lahore High Court in the YouTube case):

1)     Unless a video violates community guidelines or is flagged by a number of users, nothing is removed from .com

2)     Access to the offending video was restricted in countries where YouTube offers a localized service i.e. country-level domain in compliance with local laws

–       Google has no legal presence in Pakistan and YouTube does not offer a localized service i.e. offers a country-level domain (i.e. youtube.com.pk)

–       In the letter to court, Google stated the decision to localize was based on commercial interests and the legal environment of a country, among others, and for Pakistan, there were no immediate plans to localize

–       What was offered to Pakistan like Bangladesh and Afghanistan where there is no local presence, were interstitials – warning screens before the offending video

What other countries did in response to the objectionable video

–       Upon the request of the following countries, the video was restricted by Google/YouTube in: Indonesia, India, Jordan, Malaysia, Russia, Saudi Arabia, Singapore and Turkey where there exist localized versions of YouTube or the company is registered

–       Pakistan, Bangladesh and Afghanistan – where Google is not registered nor is there a localized version of YouTube – banned YouTube since the video was not restricted

–       While Bangladesh and Afghanistan accepted interstitials and proceeded to lift the ban on YouTube in 2013, Pakistan chose to keep the ban in place

–  According to the Pakistan Telecommunications Authority, the entire website had to be blocked as particular links to the offending video could not be blocked due to technological capability

–  PTA’s response to court on the technological capability was as follows:

1)  YouTube’s traffic is served through HTTPS, which means all sessions are secure and encrypted

2)  While HTTP (unencrypted) links have been blocked, there is no way to block HTTPS traffic

3)  Attempting to tamper with HTTPS traffic (which would not be limited to just YouTube but  Internet traffic as a whole), would be detrimental to commerce and industry in the country, said a  PTA official in court

–  Despite this, the government has been in pursuit of filters

–  Filters for HTTPS traffic not only violate privacy but are a security breach, tampering with legitimate  certificates of websites, leading to the weakening of secure communication online which would have an adverse impact on cyber security, exposing passwords and online transactions such as credit card and banking information

– This is clear through the use of proxies by citizens to circumvent the ban on YouTube; however, not only are proxies slow but they infect users’ computers with viruses and malwares and not a solution

–       Alternately, Internet Service providers can offer Value Added Services that Internet users can opt for if they want certain material blocked for consumption in their homes or, alternately, employ freely available softwares on their machines that they can manage themselves (Annex D)

SOLUTION: Self-regulation with the help of value-added services by ISPs or free software tools, along with parental control for children and viewer discretion for adults

The video, Innocence of Muslims, uploaded to YouTube by a user, must be condemned in the strongest words possible. While there are no two views that this video has hurt and offended sentiments, there are better ways of registering a protest against this video than a blanket ban on YouTube. The continuing ban on YouTube in Pakistan, which has been in place for nearly a year-and- a-half now, is depriving the citizens of Pakistan access to a platform where they can not only counter such videos by uploading positive ones about Islam and its teachings, but also utilize this platform for the acquisition of knowledge.

–  Before the ban, YouTube was being used by Pakistanis to access various types of content: lectures on Islam to recitations of the Quran; academic lectures shared by Ivy League universities; news bulletins and political talk shows by local media outlets etc

–  Small businesses, start-ups and entrepreneurs were using it to market their work and products

– Based on a rudimentary analysis of only a limited number of YouTube channels and publicly available data, the following table summarizes categorized viewership of YouTube videos (shared by Khurram Zafar, July 2013): 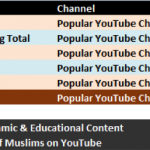 – The ban on YouTube violates citizens’ right to information

–  The ban on YouTube was placed through an executive order, issued by the Inter-Ministerial Committee for the Evaluation of Websites (IMCEW), announced by then Prime Minister, Raja Pervez Ashraf on September 17, 2012

–  Nevertheless, the IMCEW’s orders are consistently implemented by the Pakistan Telecommunications Authority (PTA) through directives issued to its licensees (Internet Service Providers)

–  PTA, in compliance with an IMCEW order, instructed that an ‘IP-level ban’ be placed on YouTube

–  A simple marketing principle for the web is this: the more you talk about something, the more traction it gets. In essence what the YouTube ban has done is popularize an otherwise unknown video and filmmaker, and driven traffic to the offending video – contrary to what should have happened

–    Alternately, the simple solution would have been just not to watch the video or any such material; unless one makes an effort to go to the specific URL, the video will not just show up

–     Unlike television, on the Internet, accessing content is a matter of choice; unless one deliberately undertakes the task of searching for a particular video and presses the play button, one cannot watch it

–  In blocking the entire domain, Pakistani citizens have been prevented from accessing a lot of useful content hosted on the platform and continue to suffer as a result

–  Empowering the state to make decisions for what is permissible and what is not sets a dangerous precedent; personal morality and political preferences then become the yardstick

–  Spending millions on filtering technology which for one, does not work, and placing it in the hands of state authorities is equivalent to giving them a carte blanche for setting up roadblocks where they please, restricting access to areas and breaking into citizens’ homes

–  The right to privacy, dignity, security, speech and information will be severely compromised, doled out at the state’s discretion

Short-term solution: Interstitials as a solution to lift the ban on YouTube.

Long-term solution: The government and stakeholders work together to enable citizens to better control their access to the Internet, by raising awareness on safe Internet surfing including freely available tools, or alternately work to provide such tools and services, for example value added services, that users can opt for.

MOIT Says It Will Comply With Court – But Has It?

Why the YouTube Ban is Illegal and Undesirable by Babar Sattar

Note on the Implementation of Prevention of Electronic Crimes Act 2016
The following note was prepared for the National Assembly's Standing Committee on Human Rights, meeting held May 20, 2019 | PDF here When the National Action Plan (NAP) was rolled out in...
106 Likes

Our Official Correspondence Problem: Section 37
On January 21, Nida Kirmani and Reema Omer received notices from Twitter Legal via email, alerting them their tweets had been reported. Twitter had received "official correspondence" claiming the content...
123 Likes

Data Protection Law
The introduction of a draft law on data protection and privacy by the IT and telecom ministry is a welcome step. In the absence of such a law, Pakistani citizens...
117 Likes